Collecting web data without an API 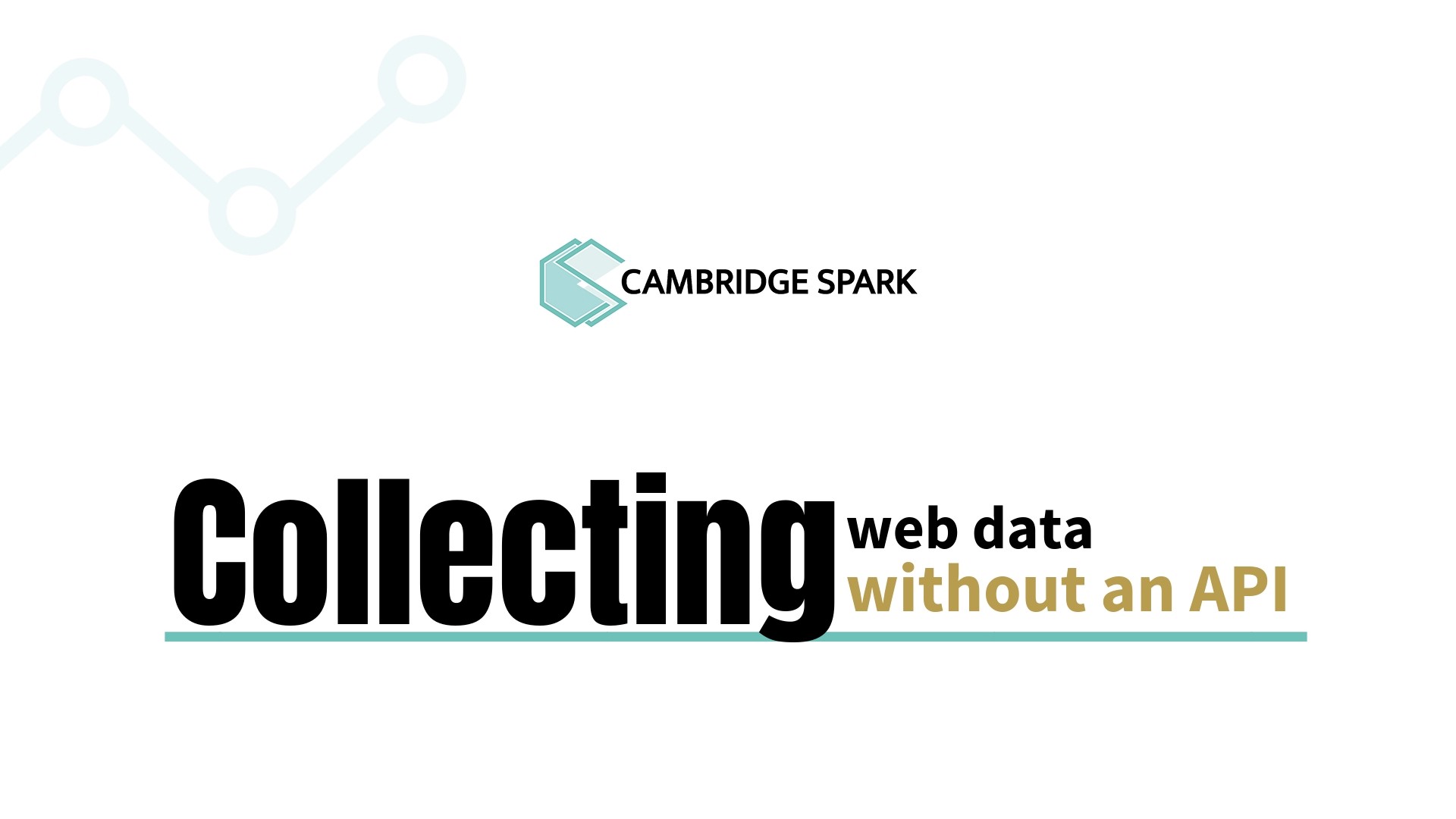 In this tutorial, we’ll show you how to extract data from Wikipedia pages.

If you’ve ever gone through an online machine learning tutorial, you’re likely to be familiar with standard datasets like Titanic casualties, Iris flowers or customer tips.

These simple, well-structured datasets are great for getting to grips with data science fundamentals. And once you’ve mastered them, you can create your own datasets to investigate anything at all. You might use public APIs to gather this data, such as the ones available for Twitter, Redditor Instagram. Many APIs also have Python packages which make it even easier to access the data you want: Tweepy for Twitter or PRAW for Reddit.

What about when you want to gather data from a website that doesn’t have a nice convenient API? If there’s not much data, it might be possible to just manually copy and paste it — a bit tedious, perhaps, but not too much trouble. And if you just want to extract a table or two from a webpage, you can even use pandas.read_html() to load and parse the page, automatically extracting tables as dataframes.

If you are not familiar with HTML, take some time to read about HTML element tags, HTML element attributes and HTML classes. Knowing about these parts of HTML will make it much easier for us to identify and extract the data we want.

Tables in HTML have a nested structure. For a fuller introduction, take a look at the w3schools.com guide. Key points are that nested inside a tableelement are tr elements, which represent the rows. And nested inside the rows are th or td elements, representing the actual cells. th denotes the header row of the table, while td elements will be the standard cells. In the following code, you can see how some elements have class or hrefattributes.

Which generates this table:

Tables can be much more complex than this, as we will see, but this nested structure is common to them all.

Extracting tables from HTML is easy with pandas:

If we look at the first item extracted, it’s the table showing information about all the cities in the UK. However, this would need cleaned up a bit — there are no column names, plus there is a lot of extraneous text such as footnote references and so on. This data is not very useable in its current format.

Imagine you want to not only get a list of all the cities in the UK, but extract some information about them from Wikipedia. And you don’t want to click on anything! We’ll use requests and beautifulsoup to do this. Wikipedia articles like these contain a vast amount of information, but we will focus on the following:

The first three items on this list will require extracting data from tables. The last item will extract data that is not in a table, which pandas would not be able to extract.

Extracting the URLs from a Wikipedia page

Although we can use pandas to get the text of the table of cities, it doesn’t get the URLs. Another option would be to just copy and paste the links from the page, but that almost defeats the point of knowing Python. We can automate this process.

There are some packages that can do this for us if we have some knowledge about how HTML is structured:

The city_list variable contains all the HTTP data for the URL we accessed. The request was successful, as a status code of 200 was returned, and around 300k characters of HTML were retrieved.

Before information can be extracted from that HTML, it must be parsed. This lets us refer to elements in the data according to various properties (such as class or attribute) and is much easier than using regular expressions.

At this point, we need to find the “List of cities” table in the HTML. This can be done by viewing the page source (available from the right-click menu in most web browsers) and searching for <table to find the start of any tables. This page contains four but the one we want looks like this: 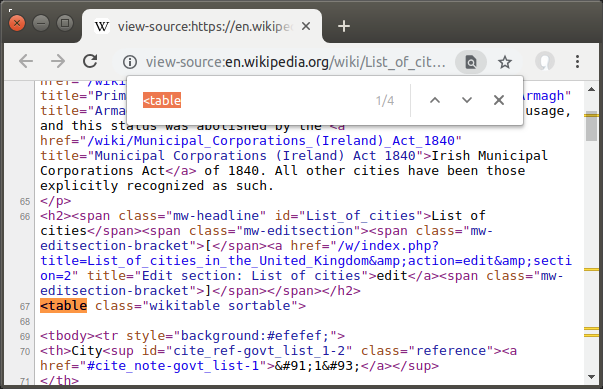 Luckily, there is only one table with that class, so there is no need to examine all the results and find the correct item. We can just use the single item in the list that the find_all() function returns.

HTML tables are organised by rows, which are tr elements inside the parent table. These can be extracted using find_all() again.

There are only 69 cities in the UK, so it looks like we’ve got the data we need plus an extra header row.

The cells in each row are td elements. The exception is the header row, which are th. Again, these can be extracted from each row using find_all(). We only want the first column of the table, which has the links to the cities' pages. This link is an a element, which can be extracted just like the other elements. It's clear from the HTML source that the first link is what we want. Once this has been found, it is the href attribute that needs to be extracted - this is the actual link. Finally, the links will be relative rather than absolute, so it will be necessary to prepend the domain name onto them.

Now that we have our links, we can loop through them and extract required information from each page. In the following part, I’ll use the example of Leeds to show you how to use the structure of HTML to extract what we need.

Which country is the city in?

This information can be found in the info box to the right of the Wikipedia page, next to the cell named “Constituent country”.

Inspecting the HTML source shows that this is inside a tr of class mergedrow. There is a header th cell with the text "Constituent country" and the data we want is in the text of the adjacent td cell.

(Note: When trying to examine the structure of the HTML, you will probably find it useful to view it in an editor that does syntax highlighting and will prettify the code to show the nested structure. Many text editors, such as SublimeText, have plugins that will do this if they do not do it natively.)

To extract this, we can search for all the mergedrow elements. Then we loop through all the pairs until we find what we want.

This works for Leeds, but what about the other cities? Unfortunately, the Wikipedia pages are not entirely consistent in how they structure their HTML. It will be necessary to check the output.

So one city is missing the data we need. That’s easily checked and it seems the problem is that the Wikipedia entry for the city of Newport in Wales uses the word “part” instead of “country”

(Note: this is a very common problem when scraping data from HTML! You think you’ve figured it all out and then the edge cases start popping up, where some tiny difference makes it impossible to extract what you want.)

This is easily fixed by checking for “part” and “country”:

print(f'Got data for {len(country_data)} of {len(links)} cities.')
# If a country was found for the city, there will be a dictionary entry for it.
Got data for 69 of 69 cities.

What is the current population?

The HTML source shows that this is going to be trickier: the population data is not neatly marked with a convenient header in the table. From looking at the entry for Leeds:

The data we want is inside a td element but this has no useful attributes we can use to identify it. However, the preceding tr element, with class mergedtoprow, contains the word "Population". So we can target that and get its next sibling in the HTML structure. This is the tr with mergedrow: then we just need to get its children and select the td element, which we know (from the HTML) is the second child in the returned iterator. The text can be extracted from this and cleaned up.

This time, let’s check all the cities at once and clean up as we go.

Oh dear! It looks like we’ve grabbed the wrong HTML element for some cities and instead got the area, or failed to get anything at all.

To fix this, we need to dig around in the HTML for cities that failed and edit our code. Here’s what the result of that should look like.

The structure of the HTML fell into three distinct categories. Derryhad a list structure inside a table cell. Several cities had rows without the mergedtoprowclass name. But most used the same structure as Leeds.

Some cities did not actually have population data listed inside tables (e.g. St.Asaph, St.David). This will likely have to be added manually.

A final issue is that the data extracted is still very messy. Ideally it would be nicely formatted as integers. However, a few regular expressions will fix that all up.

The final bit of information we’ll extract is all the links contained in the introduction for each city. In general, the introduction is the text that appears before the table of contents. Each paragraph is wrapped in a p element in HTML and the table of contents has an id of toc. Because id must be unique in an HTML document, it will be easy to identify the TOC. The Wiki pages we are working with here have the general structure:

First comes the infobox table, which we’ve already extracted data from. Then a series of paragraphs of text. Then a div containing the table of contents. All we need to do is loop through the p elements and keep checking to see if that element has a sibling below it on the page which has a particular id and, if so, stop looping through the paragraphs. And for each paragraph, we'll extract the a elements to get the links.

Putting it all together

With the code written for extracting the three required kinds of information, we can put together a little script that will do everything.

The extracted data is in three dictionaries, country_data, population_data, intro_data. There are a variety of ways to structure this for further analysis.

For the link data, it might be interesting to visualise it as a graph. That will make it possible to see how cities are connected in terms of the concepts and ideas used to define them in Wikipedia.

First, we’ll get the data into a suitable format for graphing, then save it for use in Gephi.

The data can then be loaded into Gephi and visualised. I highly recommend playing around with it! It makes is very easy to arrange the layout of the graph as well as apply colours and labels.