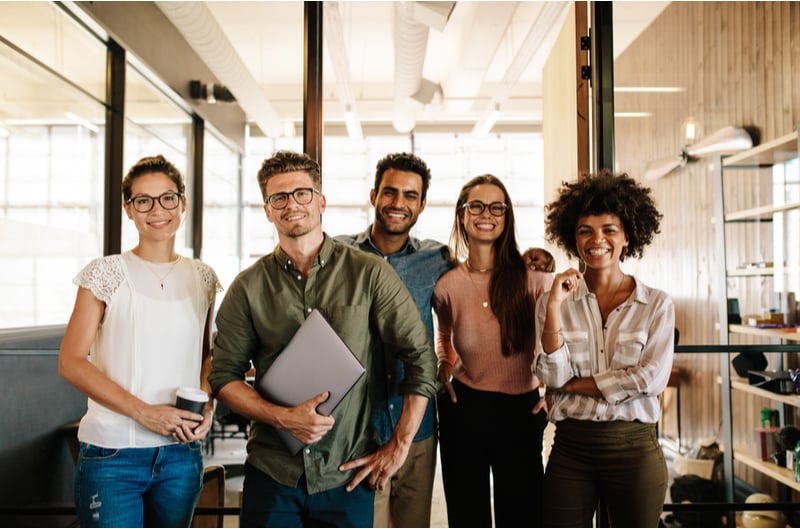 The world of work is changing fast. Data is the new currency and language, and it's everywhere. Yet many organisations are suffering from a lack of confidence in how to understand and use data. And even within data teams, a lack of diversity is holding us back.

One of the biggest challenges organisations face is the lack of training in data literacy and analysis skills across the workforce. But apprenticeships are providing a huge opportunity to turn the tide. Open to anyone and funded by the UK government’s apprenticeship scheme, they offer a more accessible route for upskilling people in data science and AI and a great opportunity to boost diversity in the field.

Data-driven decision making has never been more important for businesses. Most businesses are managing an enormous amount of data that has the potential to help them make better decisions. But the opportunity is being missed because too many are suffering from a lack of confidence in how to understand and use data.

Global research by Qlik and Accenture found that:

This lack of confidence is leading people to doubt or ignore data. In fact, the study also found that employees spend at least one hour a week procrastinating over data-related tasks.

“Everyone says they appreciate the value of data in business, but we still run into employee non-adoption,” says James Fisher, chief product officer at Qlik. “In the broader area of data literacy, which is not just statistical knowledge, people lack confidence when confronted with data. It’s a psychological barrier. The research confirms that around one-third of people feel overwhelmed, and so they procrastinate. Data literacy is where literacy was 100 years ago.”

The lack of confidence in using data is hardly surprising in the UK, given only 10% of workers say that mainstream education has prepared them to work with data. There is a lot to be done to equip workers with the skills and knowledge that will enable them to work confidently.

Clearly, more training is needed to equip people with data literacy and analysis skills. Apprenticeships offer a great opportunity as they allow organisations to build this capability with 100% funding from the UK government’s Apprenticeship Levy scheme.

Not only can apprenticeships equip people with the skills they need to become data-driven, but they can also help boost diversity in technical roles.

There is currently a huge lack of diversity in data science and AI, both in the UK and across the globe:

Yet, decades of research has shown that diverse groups are better at problem-solving and more innovative. Bringing people together from different backgrounds means new perspectives, viewpoints and knowledge, which enhances decision making and ultimately, boosts a company’s bottom line. Companies in the top quartile for racial/ethnic and gender diversity are 35% and 15% more likely to have financial returns above their national industry medians.

Perhaps even more concerning, is the fact that the lack of diversity is spilling over into our applications of data science and AI. Machine learning algorithms and AI are increasingly making decisions for us or at least influencing them in our daily lives. And a growing body of research is showing that gender and racial biases exist within these algorithms.

Even the tech giants Amazon, Facebook and Google have all admitted biases. Headlines like these are not uncommon:

A report by The Alan Turing Institute looking specifically at the issue of gender imbalance recognised that “In a data science or AI context, the presence of women brings with it a crucial advantage: it ensures that these technologies and their applications are shaped by the experiences and viewpoints of women. Increasing women’s participation is the only way to ensure that their perspectives and priorities will inform the insights that data scientists will generate, the algorithms that they will build, as well as the research agendas that they will define.”

Some of the reasons for the lack of diversity have been identified, for example, a lack of early STEM education, lack of mentorship due to underrepresentation, and a workplace culture that discourages women from pursuing data roles. It appears that even today, young girls still feel discouraged from pursuing subjects such as maths or computer science.

But it’s never too late to change paths. And apprenticeships are a great way to boost diversity in data science and AI because they are open to everyone; those just starting their career as well as those with many years behind their belt. Pre-defined pathways exist to suit individuals levels of experience and skills needed.

There is a complete suite of apprenticeships covering data literacy through to data science and AI. They are open to anyone, people of any age and experience, including those with no STEM background.

The new Data Essentials Certificate (Level 3) is a game-changer for organisations wanting to develop data literacy across the whole workforce. It covers the core concepts, skills and tools all professionals need to be data-driven in their work. And it’s a great entry point into data science and AI that can help to boost diversity in tech and data teams.

A lack of data literacy and analysis skills within the workforce is a significant blocker to organisations becoming more data-driven. Even within technical teams, the lack of gender and racial diversity is holding organisations back from achieving the best of data science and AI. Apprenticeships offer a solution to both of these problems, by providing a more accessible route for individuals and teams to upskill.

From Data Analyst to Data Scientist

Helping individuals upskill and become more employable is at the heart of what we do. Our part-time, Applied Data...

The purpose of this tutorial is to teach you how to process data with Pandas DataFrame.

Data Science and AI technologies are already having a major impact on business and society — from early and accurate...