An Introduction to Plotting 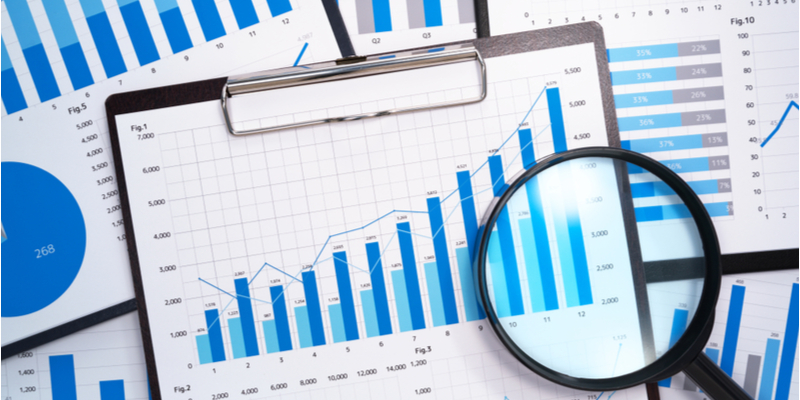 When you have a single continuous variable and want to visualise the distribution of its values in your dataset, a histogram is generally what you need. This groups the values into bins, where each bin is an interval within the range of values your variable can take. The x axis will show the interval of each bin, while the y axis shows the number of values in your dataset that fall within that interval.

A simple histogram will show the overall distribution of the passenger variable. This is easy to plot, as pandas dataframes have a built-in method for generating it. 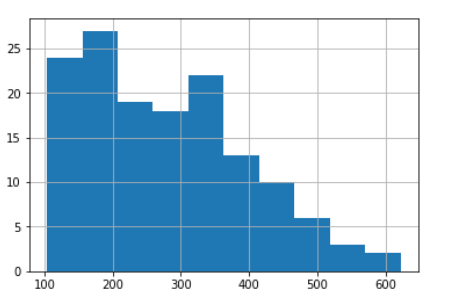 By default, pandas plots histograms using 10 bins but you could fine-tune this. Displaying more bins gives a more detailed overview of the distribution, up to a point: it all depends on how many observations you have overall and how they are distributed. You can see how using 20 bins shows more information about the distributions inside the larger 5 bins. 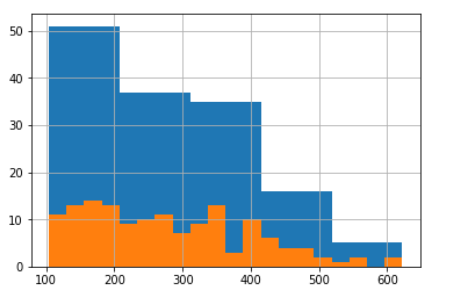 So the range of passenger numbers is a little over 100 to a bit over 600, with most flights towards the lower end. For a more precise overview, the describemethod for a dataframe's columns will give general descriptive statistics.

For a visual representation of describe, a boxplot will show the minimum and maximum values (the left and right whiskers), the range of values covered by the 25th to 75th percentiles (the box) and the value of the median (the line inside the box). 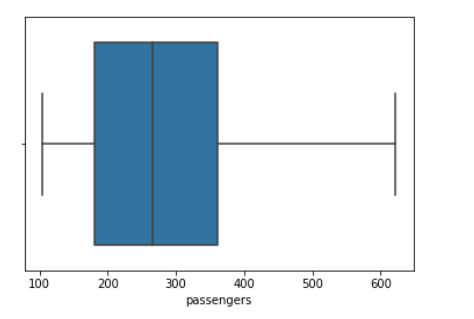 When you have a variable which takes on named, rather than numerical, values then the most common way of representing them is with a bar chart.

Here, we'll load the titanic dataset. Each row is a passenger on the ship, while the class variable gives the class of that passenger's ticket.

You can chain .plot(kind='bar') to the above value_counts() method, but I prefer to use seaborn as you can directly pass it the original data. It will then do the counting for you and allow you more control over appearance. For example, if you do not like the ordering seaborn used for the x axis, then you can set it manually as a list e.g. order=['Third', 'Second', 'First'] 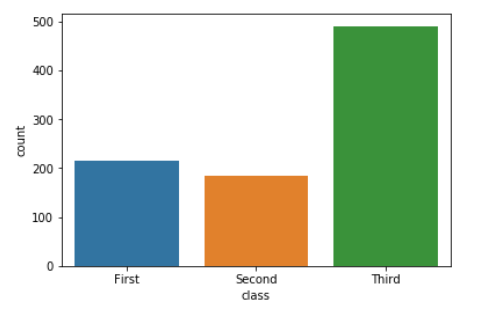 If you want to normalise the counts so as to see relative percentages rather than counts, then you just need to do that to the data before plotting it as a normal barplot.

Above, we only had a single variable. We examined it by looking at the frequency of values (the histogram) or by plotting descriptive statistics (the boxplot). But often we want to see how one variable is linked to another - as the value of one variable changes, what happens to the value of the other variable?

With continuous and ordered/unordered categorical variables, we have four possible combinations. Let's look at them in turn.

The mpg dataset contains information about cars, measuring their weight, fuel efficiency and so on. We might expect heavier cars to have lower fuel efficiency.

Generally, the best choice of visualisation for this is a scatterplot. Each point represents the relation between a single value on the x-axis and its corresponding y value. 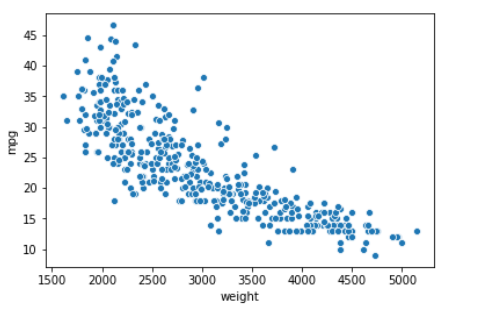 There are several variations on this, which are made available through seaborn's jointplot. The default will add histograms on the margins, for each of the two variables. 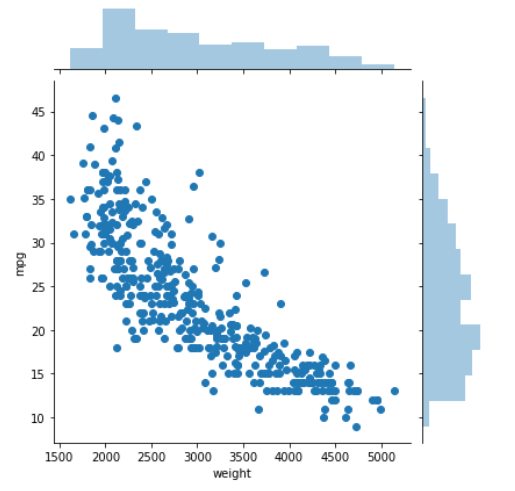 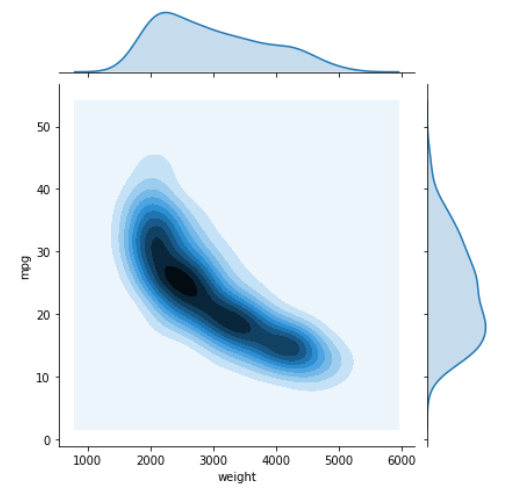 Or you can set it to hex and plot the values as hexagons, which represent histogram-type bins. This can be very useful if you have a lot of observations in your dataset and plotting all those points is slow or messy. 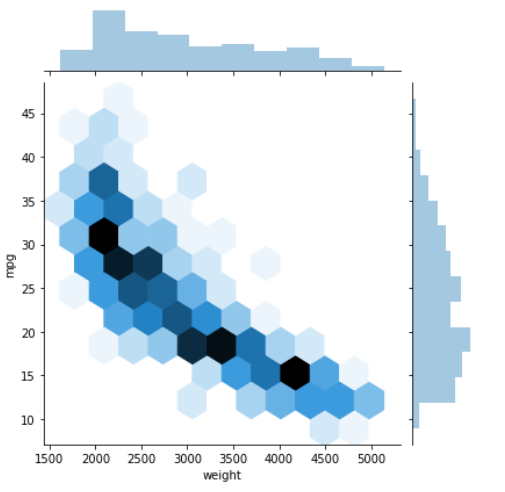 There are a few more options when it comes to jointly plotting continuous and categorical data. In general, the categorical data will go on the x-axis and you may need to change the order in which they are displayed.

Let's look at the relationship between fuel efficiency (continuous) and a car's country of origin (unordered categorical). Seaborn's willstripplot make a separate scatterplot for each categorical variable and place it on the x axis, with its own colour. It will also stagger the points a little to help see their distribution - this can be controlled with the jitter argument. 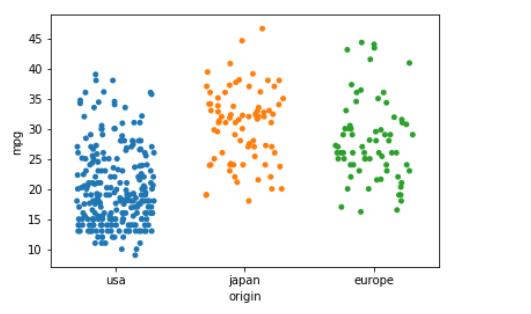 The swarmplot does the same but arranges the points so that there is no overlapping. 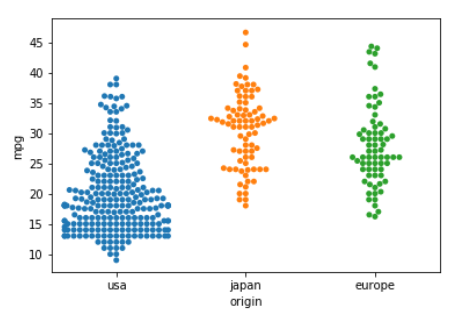 And if you want a boxplot for each categorical variable, there is no need to do them separately and manually place them in a figure - catplot is a great way to plot categorical x continuous data. 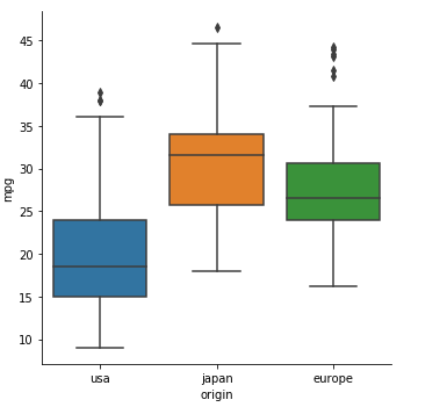 Sometimes, the categorical data will have a natural order to it. The most common of these is times or dates. This can sensibly be plotted as a line, to show how the continuous variable changes over time. Generally, the categorical data must be unique - no value should appear more than once.

The gammas dataset contains fMRI measurements taken from multiple subjects. Let's look at subject 0, and see how a signal which is dependent on blood oxygen levels (BOLD signal) changed over time in various regions of interest (ROI) in the brain.

Seaborn's lineplot method has a hue argument, that will seperate out the three different values for ROI and plot them as their own lines. 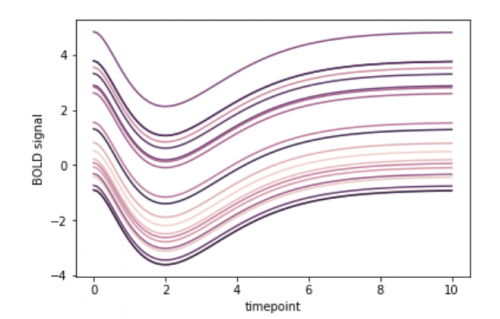 The most common non-graphical way of representing two joint categorical variables is as a contingency table. Each row of the table represents a possible value of one variable, the columns of the other variable. Cells are populated with the number of observations of pairs of those values.

We can create that table using pandas' crosstab function - just tell it which columns of a dataframe to use. 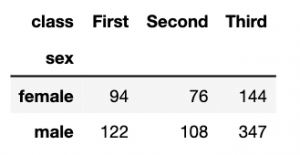 We can also normalise the values to show percentages, rather than counts.

This tabular data is easily to represent visually as a heatmap. This essentially colours in the cells of the table, based on their value. It can be a great way to very quickly communicate the joint distribution of two categorical variables, especially where you want to highlight the fact that some particular combinations are very high or low. 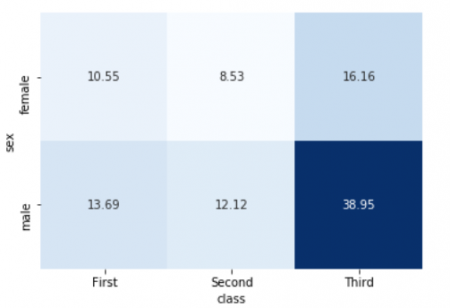 Questions to ask before plotting

Here are the questions to ask before you start plotting:

Cheat sheet: picking a visualisation for your data

And a quick list, linking types of data to types of visualisation: 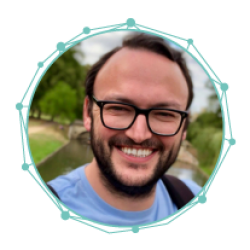 Alexander Robertson is a Data Science PhD student at the University of Edinburgh, where his research focuses on variation, usage and change in natural language and also emoji.

Panel Discussion: The Skillset of an AI Leader

Why develop Data Science & AI strategic capability in your organisation?